Hi, do you know something about Deniran? 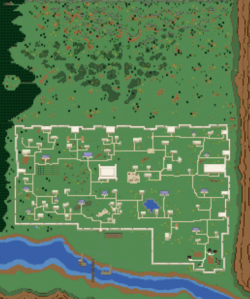 Deniran is the jewel of the crown, the center of Faiumoni and supports the army that tries to defeat enemies that want to conquer Faiumoni. Deniran has a very important commercial route with other empires that is channelled through the imperial path up to Ados on the north and with Sikhw on the south. Unfortunatelly Sikhw was conquered some time ago, and no one can reach Deniran anymore.

Points of Interest in Deniran

Deniran City is surrounded by a big city wall allowing the entrace trough a gate each at the northern and the southern side. With its large farming areas Deniran City is mostly self-sustaining in basic food. This would enable the people to endure a possible siege for a long time. Lying at a river offers great commercial and strategic benefit but can also pose a threat in times of rising water levels.

The river is a natural barrier that separates Deniran from Sikhw. To simplyfy travell and commerce between these regions a bridge was built way back. The bridge could be crossed by people but it is currently closed on the Deniran side and guarded by Marcellus, who takes his task very seriously and will bite the heads of those off trying to set foot on the bridge. There is also a small harbour managed by Fiete

The Deniran Forest north of Deniran City is a wild area filled with wild animals and some more dangerous creatures. If one keeps one's eyes open, one may even find entrances to Caves.