Hi, do you know something about Nalwor? 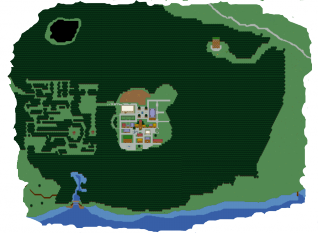 Nalwor is an ancient elvish city, that legend says was built to defend Teruykeh, the elvish capital, against an ancient evil. Nalwor was built long years before the first human set his feet on Faiumoni. Elves dislike common treats with the rest of races, so their city is hidden inside a forest.

Humans, orcs and dwarves are not the only enemies of elves. For centuries they have battled the drow elves, and the city of Nalwor has been won and lost countless times in history. Currently the green elves are in control, while rumour has it that the drow elves occupy tunnels beneath the city, planning their next attack.

Points of Interest in Nalwor

Nalwor Forest was cultivated by the elves into an intricate labyrinth with secret portals, in an effort to dissuade strangers from entering the city. Soldier elves and militia elves are stationed here as an early defense for the city. It is also an area embued with magic; magical herbs and creatures can be found here.

Nalwor is an ancient city, with some grand stone buildings with opulent interiors. A royal hall to the north west of the city is the best example of this. Lovers of nature, the elves maintain formal gardens even amongst their forest setting. These are interspersed with the administrative buildings and businesses, which include a bank, post office, jail, library and inn. There are shops which are worth visiting, as although elves dislike humans, some will trade and even make conversation, if it is to their profit. A mysterious mosaic is laid between the post office and the pottery, in the centre of the city. Near this is the tallest building in Nalwor city, a tower where each floor is decorated more sumptuously than the next.

Several holes in the ground the city of Nalwor is built on lead to a large network of underground tunnels. Nalworian inhabitants avoid those entrances but watch them suspiciously; it happened not only once that an elvish child lost the way in the tunnels and was never seen again by their parents. Some of the more fearsome elves urge that the dark elf forces regain power but Nalwor's Mayor Maerion advises not to terrify the citizens needlessly since noone has seen a single dark elf in daylight for ages.