Hi, do you know something about Ados? 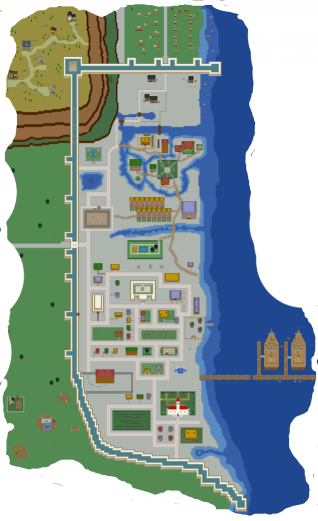 Ados is a coastal city with a very important port, where merchants arrive to sell their stuff. Ados is the end of an important commercial route that has its heart at Deniran, the capital of Faiumoni. It is populated by 300 persons.

Points of Interest in Ados City

Once you pass Ados' gates you walk past a huge arena surrounded by deathly looking spikes. This is the Ados Deathmatch run by the brothers Thanatos and Thonatus, where Faiumoni heroes face terrifying creatures in a battle of life and death - and earn nothing less than eternal fame.

There are many houses for sale in Ados. The agent for Ados is Reg Denson, who is based on the top floor of the Town Hall. Ados Town Hall is also the home of Mr Taxman, who every house owner on Faiumoni must pay taxes to once a month. There are also some special houses, one owned by Zara, who is on holiday in Athor, and another owned by Mr Ross, who lives with his daughter Susi.

The Port used to be Ados' gateway to the world and one of its most famous sights. High poles one next to the other, white sails like close clouds; every single step was like a journey around the world: the air was filled with the scent of foreign spices and the sound of unknown tongues. Men of all kind and culture offered there ware as one walks past. But after heavy pirate attacks the port was destroyed almost completely and is now closed due to reconstruction.

The north part of Ados city features a park where children play, a bakery producing some fines pies and a spooky Haunted House, with a resident ghost, Carena. There is also a smithy which produces gold bars and mithril bars, a bank and a bar with a rather attractive couple of bartenders.

Ados' whole administrative machinery is located in the townhall. Reg Denson manages all estates in Ados and can tell a new citizen whether there are unhabitated houses left; if one plans to file for divorce the town's lawyer Wilfred is the man to talk to. Mr Taxman's real name has been forgotten by most as he practically lives for his job only; house rents from all over Faiumoni are collected and administrated by him, also he carefully keeps track of the prices traders demand for their goods.

Heading north from the townhall the adventurer will find the old Ados Palace. Formerly being the king's summer residence it is now said to be taken over by a band of outlaws. All attempts to recapture the building failed and it seems the occupants are not working on their own but are supported by the well known and feared assassin guild. Nothing can be proved though...

Around the palace the city life takes place: Thirsty visitors can rest in Ados bar and be served a cool beer by the beautiful maid Siandra. If you're lucky you can even have a short talk with Stichard Rallman there, a sometimes complicated but nonetheless sensible person. Just a few steps north you run into Ados library which is famous for the Wikipedia, Faiumoni's probably most complete encyclopedia about that faraway place best known as "Real World". As those thousands of books containing millions of pages are nearly impossible to handle the inquisitive mind is well advised to ask the Wikipedian for help. Cloth traders should also pay Ida a short visit as she is always on the lookout for rare materials.

Under Ados are Ados Sewers, Ados Abandoned Keep, dungeons Outside Ados and Ados Caves. To the north you can reach the Amazon Tunnel, and the Assassin Tunnel can be accessed from Ados Castle.