Hi, do you know something about Or'ril? 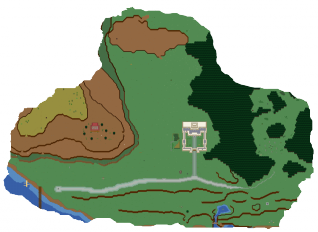 To defend the route from Ados to Deniran a set of castles were built around the imperial path. Now Or'ril is abandoned because the empire's army has been sent to defend the south part of the empire that is suffering constant attacks. It used to be populated by a unit of Deniran's swordmen, around 60 of them, plus a set of helpers. It is not known if there is anyone any longer living in the castle.

Points of Interest in Or'ril

Built to defend the route from Ados to Deniran and formerly manned by 60 Deniran swordsmen Or'ril Castle now seems to be unpopulated. It has been years ago since the last worrying letters about unholy sounds from deep below the Castle have reached the capital. Nobody knows what has happened to those brave soldiers from Or'ril Castle but due to their war against Blordrough the empire has no forces left to reoccupy this outpost.

North of Or'ril Castle a large orc clan has settled down some time ago. Despite some minor skirmishes they have stayed quite unaggressive but worried voices claim its only a matter of time until the orcs attack Semos.

Or'ril forest is famous for its ancient shrine presumably built druids of a long gone tribe. However wanderers should be aware that some of the stone figures are said to be alive and protecting this holy place.

Any visitor of the forest will notice an uncommon high number of rats populating it. Some citizen of Semos even say they have seen mutated rats as tall as a man and standing upright. But as it is impossible to any reliable source about such "ratmen" they should be considered as a myth.

As one walks along Or'ril River they might notice a faint shimmer in the water; the shoal parts are full of gold nuggets and more than one adventurer have tried their luck here and became rich men. For those who are new to gold panning old Bill has good advise.

Not far north from here you will find Jynath's hut. In matters of concocting potions the witch living here is as talented as Semos healers.