Hi, do you know something about Orril Dungeon? 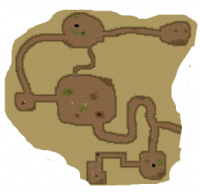 The Orril Dungeon is also known as the "Rat Dungeon". Maybe you will find your way to something special down in the tunnels...

In this place you always find all kinds of rats. It is a good place for collecting cheese and money. There is a hidden secret Ratcity which you will maybe find while being brave on your way through the tunnels of the Orril Dungeon... So keep your eyes wide open and explore that nice area.

The Ratcity is a hidden town in the Orril Dungeon. The inhabitants are mainly humanlike rat mutants like Ratwomen and Ratmen who built up their own city in the dark areas of the dungeon where they are suppose to be safe. Normally their only fear is the amount of young brave heroes who are exploring their town. Therefore the rat-army doubled the amount of soldiers and their armor and weapons.

Despite their power, the inhabitants of Ratcity are having problems with taking care of their own family and friends. Therefore some are already lost in the wide corridors of Orril Dungeon. Some heroes told others about a young mother in one of the Ratcity houses who is afraid for her children. Agnus is feeling so worried about her children because she doesn't know where her children are and if they are safe. Maybe you can help her with finding that out?