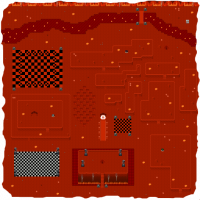 Hell is a fiery place deep below the ground, a place of great evil. It's full of dark monsters and strange people.

Long ago a great arch demon practised dark magic in Nalwor Caves. This opened up a huge rift, a massive black hole in Nalwor Forest which you can see clearly from the aerial map, and a black drop down to Hell from the caves.

Hell is a dangerous place, only experienced warriors should go there. Most inhabitants are very strong creatures like devil monks, fallen angels, golden deaths and imps. It's very hot in there because the devil likes to turn the heat up.

The only person that is actually nice to you is Grim reaper. When you want to leave hell you can ask him and he will give you a riddle which you have to solve. He is also a guard that takes care of hell and wants to keep it hot.

There is a chess table in hell probably so that Grim reaper and repaeR mirG don't get bored while waiting for heated up adventurers to leave the fiery place.

Shortly after entering that hot area you will meet a young boy whose name is Tomi. He is bounded to a table, guarded by three strange creatures which are taking care of him to not escape from his destiny. Maybe you can ask him if he needs some help? Maybe he needs something to cool down?

One thing is for sure: Hell is really what we all know about it... Dangerous, strange and a bit of bizarre...But a trip worth it!