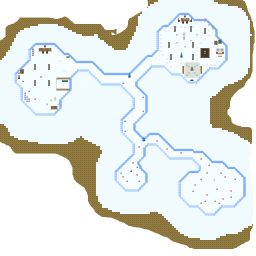 The Semos Yeti Cave is integrated into the Semos Mountain area and lies on the way to the Kikareukin Caves in the North-West of Semos City. It's an icy place in which the Cave find its place, better take something warm to dress with you when you walk there.

Once upon a time there was a lonely, for humans strange looking, creature which loved it to be surrounded by trees and long meadows. When the humans started to create towns, felt trees and destroyed the creatures biotope, it had to find a new place to live and went out on a long travel far away into the mountains. After some time, the creature, which later got the name Mr. Yeti, met some animals which were really nice to him. He searched for a cave for making it to his new living area, and although he prefered forests and the sun outside, he went into a dark icy quiet cave.

After living some time there, lonely and freezing, the Yetis body started to change itself for surviving in that, for the Yeti, new area so his fur became thick, warm and white as it was normal for icy geographical regions. What makes the Mr. Yeti so upset was, that he missed someone to share his life with, so he went out again and tried to find his true love to spent the rest of his life with. He never gave up, that is why he met her after some months of searching...

He found a young Yeti girl which he already knew from his childhood. They soon became married and started to live together in the icy cave. Mrs. Yeti was her name from now on. After some time in the cave, they both got into some trouble with each other and they decided to seperate and live in 2 different rooms. For paying their bills in time, they had to allow some creatures to move into their third room in their cave. The lodgers are ice golems and an ice giant, which are still living there, also some penguins found their way into the cave.

Can you maybe try it to help the young couple to move in together again and making them to rebuilt their marriage? Maybe asking Mrs. Yeti will help you here...Also Mr. Yeti could be unhappy because he needs something ...