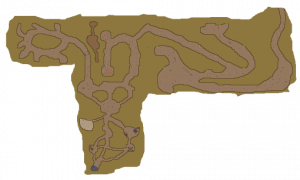 The Drow Tunnels are populated by evil dark elves which are really dangerous. But there are also some mystical creatures which are waiting for their next victims...

The Drow Tunnels are accessible from different places all around the Nalwor area. They were built by the Dark Elves who carved a massive system of underground corridors long ago.

Many years after normal Elves first entered the world, a new kind of Elves emerged, the Dark Elves were born. Their ancestors now dwell in the Drow Tunnels, waiting for young heroes and new victims to sate their rage against human beings. However, these Dark Elves are not the only perils there, other creatures like a huge giant spider dwell in the shadows, waiting for human flesh. Also dwelling in the tunnels are the matronmothers with their poisonous arms, eager to protect their children.

There is also a npc somewhere in Nalwor called Maerion. He has a huge task for you and a nice quest reward after you complete it... You should visit him when you are ready for an awesome adventure down in the Drow Tunnels!

Are you ready to explore their world? Are you brave enough to pass that challenge? Take a strong weapon, some potions and antidotes and venture forth, young Hero!